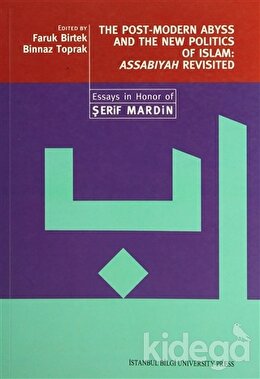 “We are here taking Turkey as our venue to discuss the rise of Islamic persuasion of more recent times. Turkish case is no Taliban or Afghanistan, no Pakistan or Yemen. Turkish case we think represents what is today new in the Islamic world more than the aforementioned examples. What is remarkable in the Turkish case is that the rise of Islamic practice has come on the heels of a century of secularization which only had accelerated in the last half of that hundred years.” Islam speaks of two languages today in Turkey: a “language of dispossesed” and a “language of (a)possessing”. Şerif Mardin, as a prominent sociologist with his work “Center-Periphery Relations: A Key to Turkish Politics?” well anticipated and clarified this new Islamic politics. Birtek and Toprak aim to celebrate several aspects of Mardin’s work with articles that advert this new Islamic era through a view of history and policy.

The Post-Modern Abyss and the New Politics of Islam: Assabiyah Revisited, Binnaz Toprak